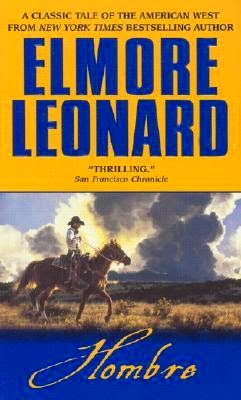 “It was one thing to know a woman would die if she didn’t get help. It was another thing to say you’d die helping her.”

Elmore Leonard is one of those authors I’ve known about for a while but haven’t had a chance to read his work. For reasons I can’t remember, I thought of Jackie Brown a few weeks back and instead of popping in the DVD as I’ve done nearly a dozen times before, I decided to track down a copy of the book it’s based on. Rum Punch was my first Leonard novel and I really liked it and I wanted to read another book by Leonard because I was already pretty familiar with the story of Rum Punch. I found out Leonard wrote westerns early in his career and since I couldn’t recall ever reading a western before, I thought I’d kill two birds with one stone.

All this led me to Hombre, known as one of his better westerns. While it was a short read (under two hundred pages and the font was slightly larger than usual for a mass market paperback) it packed a punch and similar to Rum Punch, the whole story kind of sneaks up on you. As I mentioned, this is my first conscious foray into western literature and I was pleasantly surprised just how little the genre mattered to the story. The western elements of it (said the western genre noob) were more just set dressing and the story feels as though it could easily be transposed to a more modern, even a contemporary, setting. In other words, Hombre is crime fiction.

The plot is simple, as befits a novel of short length. It’s a first person account by a young man name Carl Allen who wants to put to paper his account of the trial he and a few other passengers went through during a trip in a mud coach. The novel quickly setups the fateful encounter of six passengers who embark on the last trip of Henry Mendez, a division manager of a stagecoach company. Complications ensue when bandits rob the coach, specifically Mr. Favor and Indian agent who’s defrauded the American Government of a few thousand dollars. The events of the robbery, which doesn’t go as planned, leaves all the passengers in a very difficult situation. The passengers are stranded in the desert mountains of southern Arizona with very little food and water and four criminals on their heels. 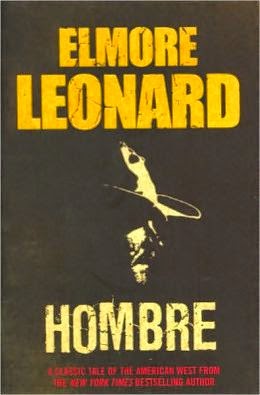 While the above serves as a good description of the plot, the story is really about the man (or hombre) named John Russell. He was raised by Apaches and, at the novel’s beginning, he is on his way to claim his father’s farm and potentially return to white man’s society. His background is crucial to the story because the other passengers act in a specific way towards him based on their own identity and background. The passengers on the coach include Mr. Favor and his wife, young Carl Allen, a teenage girl who was kidnapped by Apaches and lived with them for a month, a man who turns out to be one of the bandits and Mr. Mendez as the coach driver. All of them view Russell in a different way and due to the seriousness of their situation after the robbery, how they view him is directly linked to their survival because if there is one man capable of getting them out of the shit hole they’ve got themselves in, it’s Russell.

Leonard uses this setup to play around with some interesting, and rather gripping, themes. The story deals mostly with self-preservation in the face of helping others. It’s individual wellbeing versus the collective wellbeing. The use of characters that are of different races (Mexican, Apache and white American) as well as characters that have been affected by their interaction with other races gives the survival themes a more disturbing edge. All of the characters quickly developed a strong dislike of Russell even though he’s the one who’s kept them alive for the duration of the book but their dislike, and for some it’s hatred, of him is reflective of their inability to act. By making him the defector leader of the group the other characters are in a position to argue with him about what he does and doesn’t do, not realizing they’re incapable of making those same decisions. It’s easier for them to point the finger at him because in their eyes he’s an Apache Indian and as such, is a second class citizen.

How the characters interact is the key to the novel’s success. It’s riveting to see what they argue about and what their reasons are for making those arguments. It’s also interesting to see how they act when they’re given the power to do something. By using a first person narration, Leonard is able to clear the path and let the reader deduce his own reasons for explaining the characters’ behaviours. Carl Allen is young and naïve and he asks more questions than provides answers. Those questions are left there on the page for the reader to answer, as uncomfortable as some of them are. It’s short and Leonard’s writing is punchy, even so early in his writing career. I like how short it is because any longer and this story would have run out of wind but as it stands, Hombre is a tense and engaging read. I’ve genuinely curious if his other western novels are as good and it’s something I’ll have to look into.