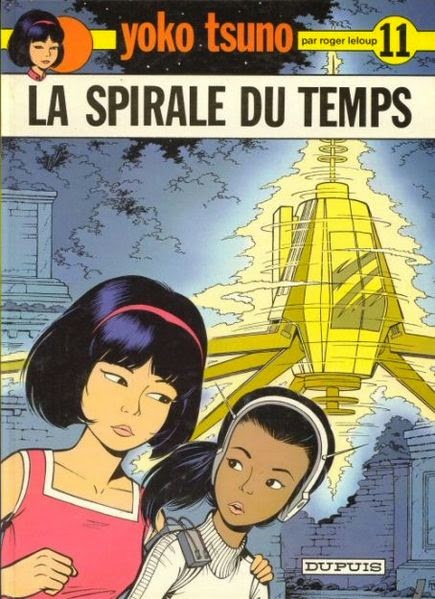 Back in my introductory post for Shared Universe Reviews I mentioned how I first got introduced to comics via my dad’s collection of bandes dessinées. So far I’ve only ever reviewed one of them (the latest volume of Blacksad, read about it here) but it wasn’t very representative of the BDs I read in my youth. I read a whole bunch, the entire Tintin series, all of Lucky Luke and Astérix. I also really enjoyed reading the zany adventures of office slacker Gaston Lagaffe but one of my favourite series to read was Yoko Tsuno by Roger Leloup.

For those who don’t know him, Roger Leloup is a former collaborator of Hergé on his most famous creation, Tintin. He’s mostly known for creating the series and eponymous character of Yoko Tsuno which he has been writing and drawing since 1970! The most recent album came out in 2012. I haven’t read all of them albums but by reading through my dad’s collection and the albums available at my primary school library, I’ve read nearly 20 out of the 26 album and one novel long series. It’s been ongoing for forty years and with good reason. It stars Yoko Tsuno, an electrical engineer, and the many adventures she has throughout Europe and the rest of the world. She also regularly has adventures in space with the Vineans, blue humanoids with advanced technology. Nearly all of the stories deal with advanced science but I wouldn’t typically categorize the series as being firmly in the science fiction genre. That’s probably because Leloup ensures that each story is firmly grounded in reality by providing the reader with strong characters.

La Spirale du Temps begins while Yoko is spending time in Borneo visiting her cousin. While visiting the local ruins she witnesses a strange event.  A whirling device materializes out of thin air and a young woman emerges to meet with two men who seem to have prepared for the arrival of the machine. Yoko rescues the girl after she’s attacked by the men and soon she’s wrapped up in what will be her first time travel adventure.

The young girl Yoko rescued is called Monya and she’s from the 39th century. It was her father’s wish that she travel back in time to prevent the destruction of Earth during their time period. Aided by Yoko, she sets out to find Dr. Webbs, the inventor of “la bombe a contraction” or the contraction bomb. When they meet up with Webbs he shares part of his research with them but chooses to ignore Monya’s warning that his experiments will one day lead to the doom of mankind. After finding a sealed door bearing her great uncle’s name on in in Webbs research facility, Yoko decides to travel back in time to uncover the secrets of Webbs’ antimatter research.

La Spirale du Temps is a notable entry in the series because it introduces the concept of time travel as well as the recurring character of Monya. Leloup also shows that he’s adept at writing a time travel story that doesn’t get stuck or bogged down by the details. He merges two types of time travel paradoxes together into a tale that doesn’t feel overly constructed but unquestioningly dealt with time travel. What’s interesting is that one of the paradoxes is used for travelling back in time and the other is used for travelling forward in time. Leloup uses the Novikov self-consistency principle in how Yoko travels back to the time of World War II and the events that happen during her visit affected certain things like what Yoko’s mother chose to name her daughter and the difficulties her great uncle alluded to in letters to his wife. In this sense, everything Yoko did back in time was meant to happen since it had already happened. When Yoko asks Monya if she will leave for the future she replies that she’ll be staying in the present. It’s dangerous to travel to an unknown future. She goes on to explain the branching universe hypothesis which Leloup uses for future time travel. The event that took place in the present changed the course of history which means that tomorrow now holds just as many secrets for Monya as it does for Yoko since history has branched off, using the present events as the split in direction. It’s an interesting approach to time travel but I think it works rather well, both paradoxes being used at the same time but separately based on the direction of travel. 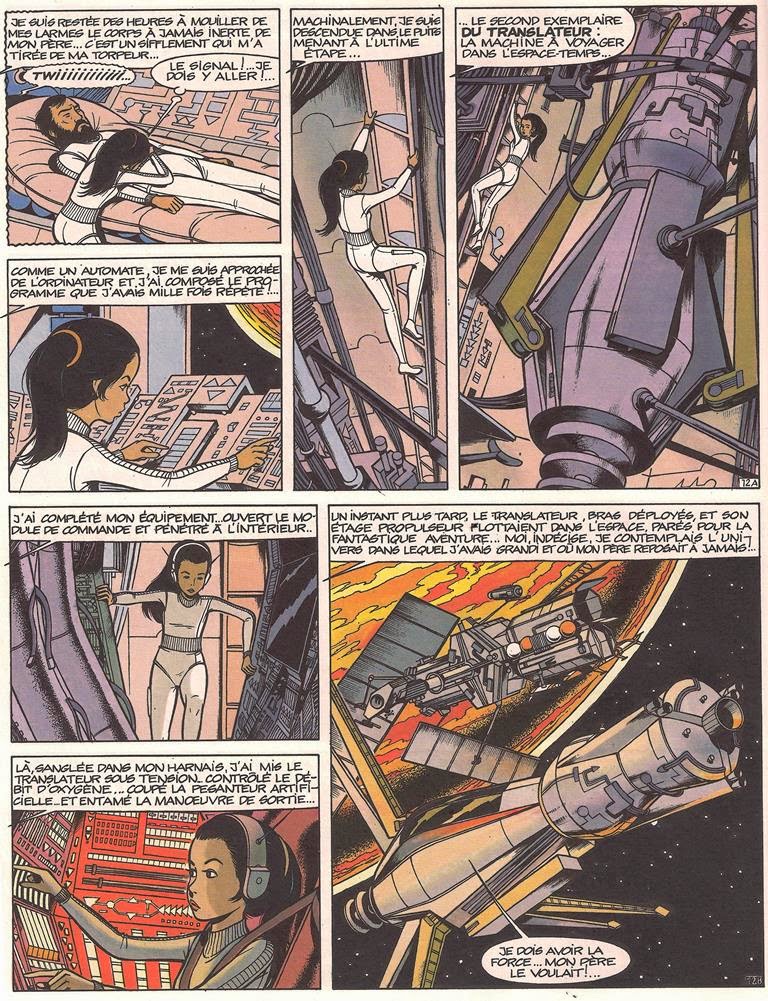 One of the reasons I enjoy this series so much is the art. A bit unsurprisingly, considering his background, Leloup uses a “ligne claire” (clear line) style of art. Hergé, creator of Tintin is often regarded as the father of ligne claire, a detailed style of art that is also notable for its clean and crips finish. All of the details are produced using a single, uniform ink line. Leloup doesn’t use crosshatchings to creating shading; in fact shadows are used sparingly. Leloup is very good at combining both key elements of ligne claire, the use of strong cartooning skills for the characters and a highly detailed and realistic style for the backgrounds. Leloup’s characters are usually less cartoonish than what is traditionally found in other ligne claire BDs. Yoko’s stories take place in various exotic settings around the world and some of the albums also deal with science fictional and alien locations but it’s all drawn in a very realistic way. Leloup regularly uses photo reference for buildings, clothing and vehicles. Yoko often changes outfits through the course of one story.

I never noticed it before but Leloup’s pages are split horizontally into two halves. Presumably this is how he’s able to produce significant details in his drawings while using a uniform line because each page is actually made up of two separate sheets. I have no idea how large he initially draws these pages but each finished page is made up of a top and bottom portion, labeled by the page number and the suffix of A (for the top) and B (for the bottom). The art is clearly shrunk down and combined, two sheets at a time, to form a complete page. It’s interesting to notice that some panels are very large but they never more than one sheet (or half a page) in size.

The colouring, which was done by Béatrice from Studio Leonardo is also indicative of the type of colouring often used with ligne claire art. It presents an objective view of the world, leaving almost nothing in shadow. A scene taking place as night is coloured in such a way as to clearly indicate the time of night but the details of the background are as clear as the characters.

Yoko Tsuno is a perfect comic for North American audiences who are tired of the often sexist and thoughtless comics that line the walls of comic shops. Yoko is a beautiful and very capable woman and her stories are exciting because of the quality in the writing. Though Leloup doesn’t draw women in an exploitive way, there is an uncanny similarity in the physique of many of the female characters in the series. But since the same criticism can be made regarding the male characters, I don’t fret over it. I have to clarify that this comic doesn’t have a feminist agenda. It’s much more neutral in tone and it would rather spend time with themes of technology, family and ecology than be bogged down by gender politics. Intelligent writing and a clear, classic looking art give Yoko Tsuno a timeless feel and I’m certain I’ll be revisiting the series time and again. 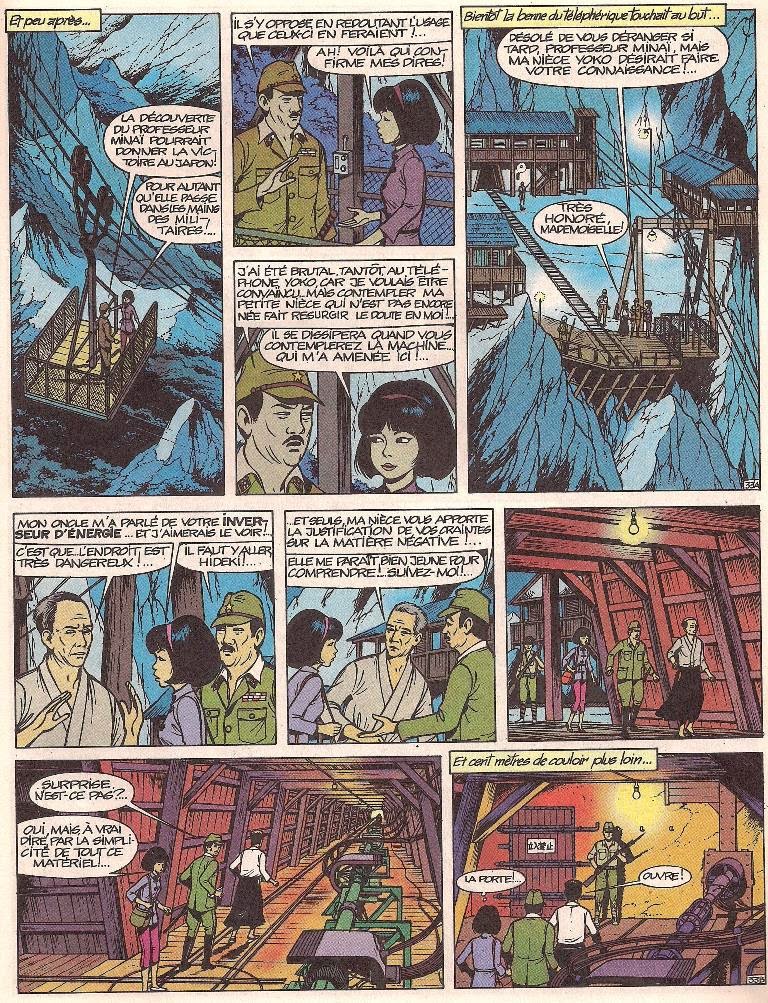 My review is based on the French edition published by Dupuis published in 1981. Also thanks to my father for unknowingly letting me borrow this and a few other Yoko Tsuso albums. I promise to bring them back.
Posted by Mario Lebel at 16:56