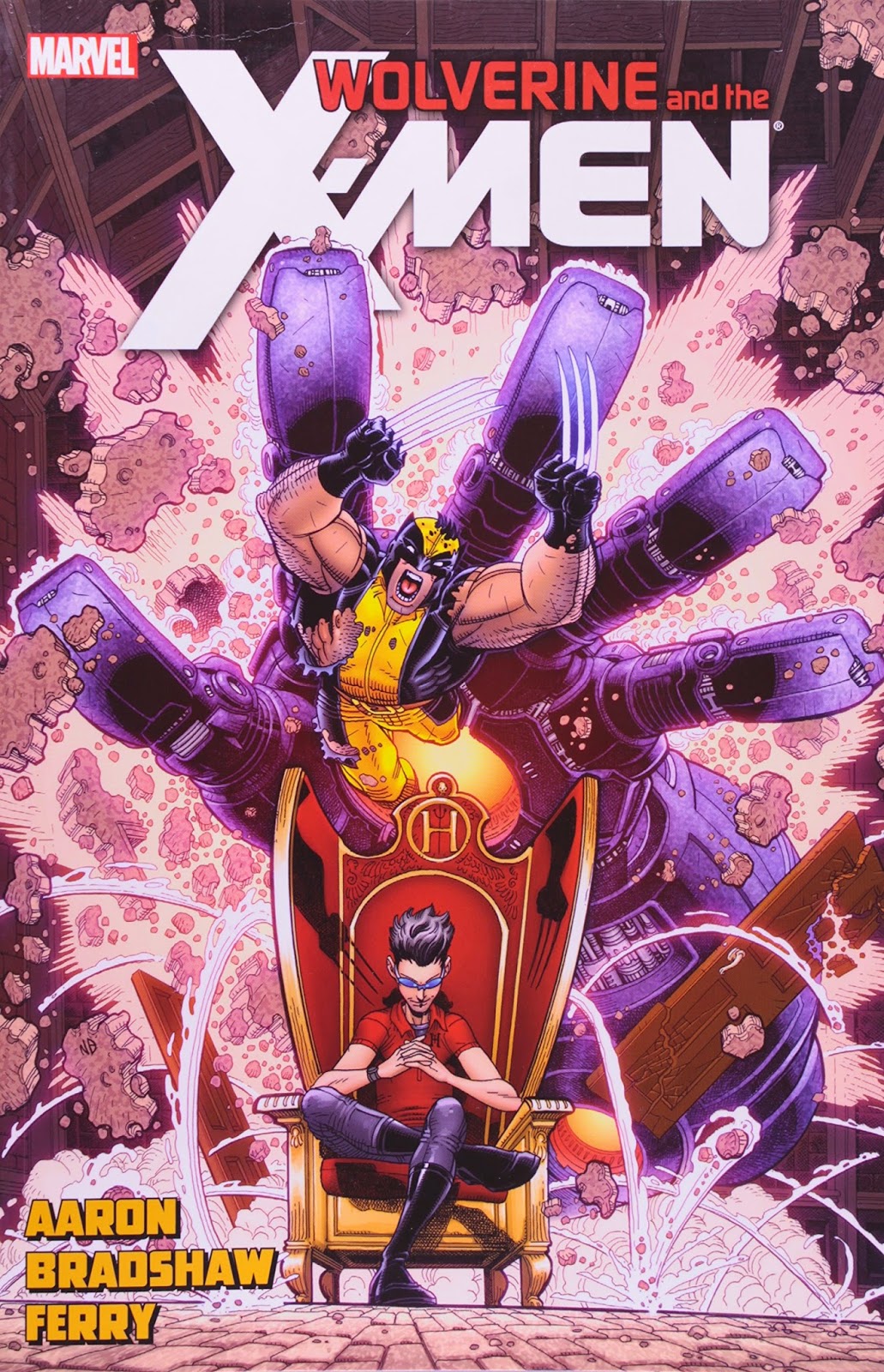 I’ve mentioned before how I really like Jason Aaron and that makes it all the more disappointing that the volume 7 of Wolverine and the X-men is probably the lowest point of the entire series. It’s a shame because for a while Wolverine and the X-men was the best X-men title at Marvel. With X-men: Schism in 2011 Aaron was spearheading the line and thanks in part to his efforts and the efforts of many other writers it was an exciting time to be reading X-men comics. That was true for almost a year. By the time the Avengers vs. X-men comic around, Wolverine and the X-men along with all the other X-men titles were pulled into a companywide event. The stories radically shifted focus but Aaron was still able to write interesting stories, despite the Marvel Universe’s new direction.

It wasn’t all bad though. Since the series written by Aaron wasn’t the only one affected it still remained the most enjoyable and consistent X-men comic. When I reviewed volumes 5 and 6, my enjoyment was based on the return to form following the interruptions Avengers fighting X-men and nobody being really satisfied with the event. The downside to those volumes is that you could easily sense that Aaron and his team of artist were working hard to rebuild the momentum the series had lost during the event. It’s great that they were doing so but it also made those volumes feel like they were laying the ground work and everybody was holding back a little. At the time I hypothesized that the series was building towards a big storyline which was meant to pay-off on all the subplots that were building since the first issue.
Turns out I was right but the pay-off storyline failed to cap off all the build-up. Quite a few subplots come to a head in this story. Some of the highlights include Idie’s struggle with her identity as a hero, Quentin Quire’s development from school rebel to full fleshed X-man, Hush and Toad’s romance, the fate of Broo following the attempt to assassinate him, and most important of all the new Hellfire Club’s master plan comes to fruition. It was being setup for years and finally we find out what the Hellfire Club has been up to. They’ve been working on opening up their own school for mutants but it is, obviously, a school to teach mutants how to become supervillains. It’s a pretty lame idea and the execution doesn’t leave much to be desired. The Hellfire Club hires a slew of evil mutants to teach at the school and they include Mystique, Sauron, Mondo, Sabretooth, Wendigo, Dog Logan, and Master Pandemonium. All of these characters and subplots should have made for a better story but in the end many of the character moments feel poorly thought-out and regularly cliché. 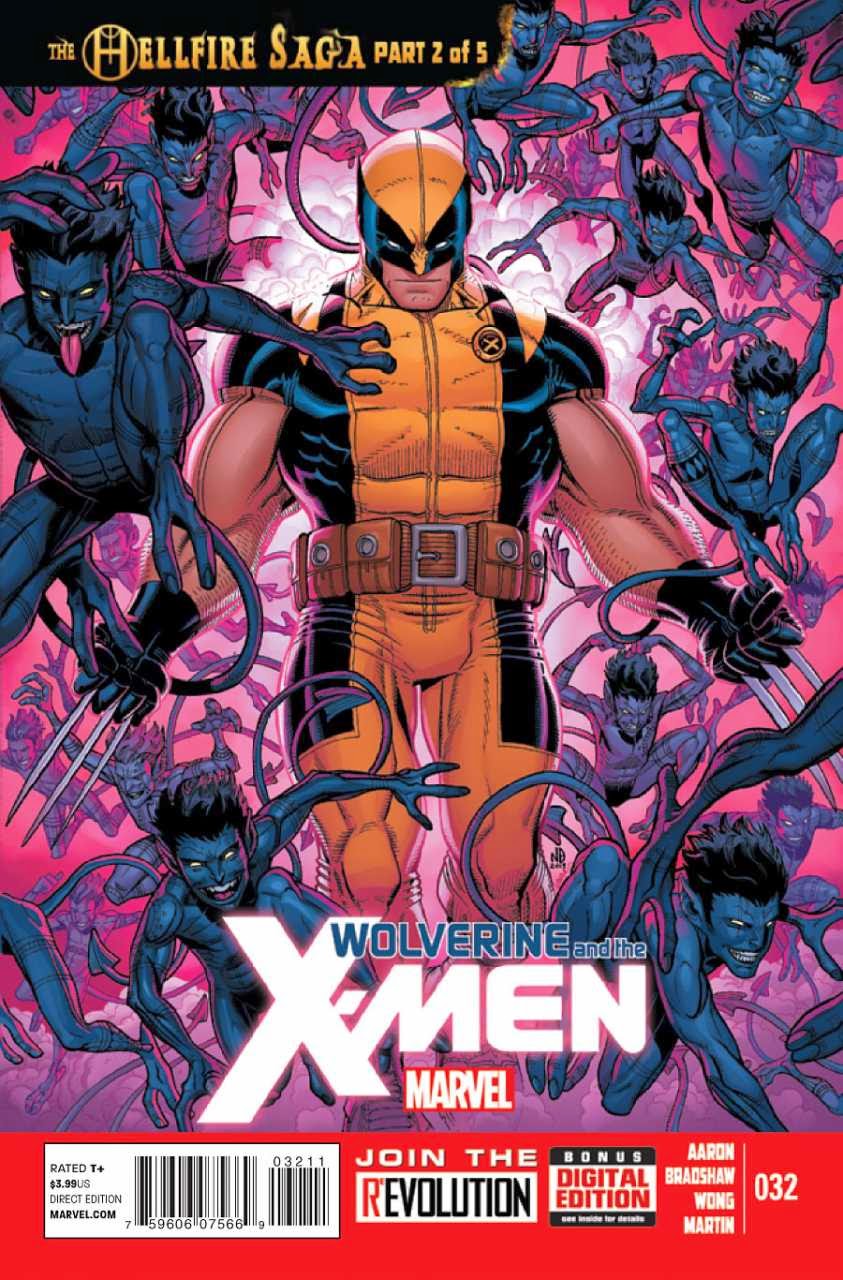 The other serious shortcoming of this storyline is the lack of consistency in tone. Aaron did a lot of work making sure this story feels big and important but during the story itself he undermines his own storytelling ambition with misplaced and unnecessary levity. While reading I got repeated mixed signals as to what kind of comic I was reading. The dichotomy between the funny moments and the supposedly serious character drama was distracted and instead of working together both elements were competing against each other.

It’s actually a little surprising that Aaron’s struggles with tone as he’s usually pretty skilled at taking a ridiculous idea or an odd situation and examining them seriously. His run writing solo Wolverine stories is a good example of this. In this story there is a character whose mutant power is essentially throwing his boogers around. It’s an idiotic concept but Aaron subverts your expectations by turning him into a fierce competitor to the young X-men, rather than having him be the loser of the Hellfire Academy. He never takes the idea seriously enough though and it’s just one long, extended gag that lasts for a few issues too many. It doesn’t work with the kind of story Aaron is trying to tell with these issues. At least the kind of story I think he’s trying to tell. Wolverine and the X-men has been a quirky series from the start but it’s always had heart and Aaron’s done an admirable job balancing his stories with an acceptable and enjoyable dose of humour. With this story, the humour takes the forefront on a story that realistically should have had probably the least amount of humour than any of the previous storylines.

Even though this is my least favourite storyline of the series (yes, even less enjoyable than the Avengers vs. X-men tie-in issues) Aaron still writes good moments and Nick Bradshaw continues to impress on art. With this volume Nick Bradshaw has cemented his position as the series’ signature artist. He’s often one of the most memorable artists of Wolverine and the X-men in part because he can include an impressive amount of detail in each page while still maintaining strong narrative compositions and the art of each individual panel also remains clear. His art is a little more cartoony than I usually like it to be. He’s like a cartoony Art Adams except he can actually meet deadlines. It’s a pretty versatile style though and it works well for different kinds of stories. While the tone of these issues is inconsistent to the point of ruining the story the art works for the serious scenes the humorous ones. It also works for the action-heavy final issues.  Another artist filled in for the first issue collected in this volume. The always good Pasqual Ferry uses an interesting style compared to a lot of his other work. I wouldn’t want an entire series in this style but for a single issue story it works well. 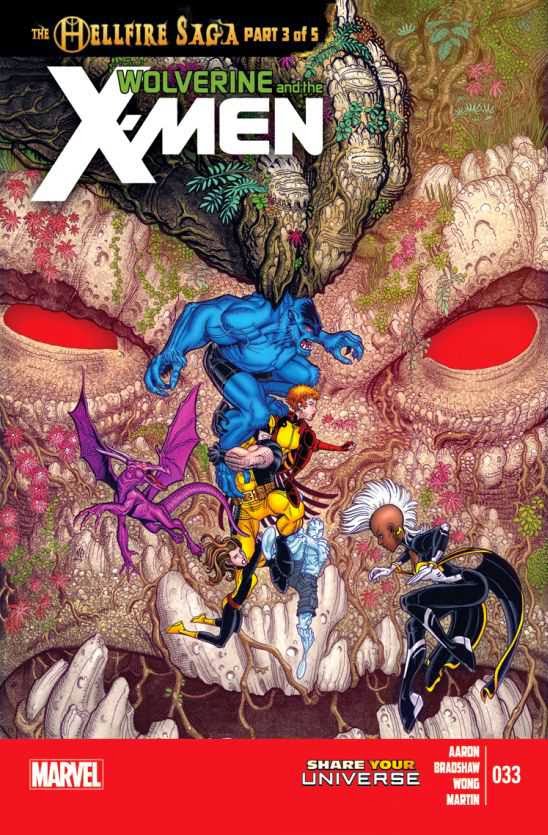 I was expecting something better for the penultimate volume of Wolverine and the X-men. Especially considering that volume 5 and 6, while good, were noticeably structured as building arcs. It’s annoying that the big storyline is one where the new Hellfire Club opens up their own mutant school and kidnap students from the Jean Grey School for Higher Learning. The problem with the Hellfire Club is that they had the potential to be really interesting. It’s surprising that Aaron was able to maintain a relatively high level of potential threat in these characters. For most of the series they were working primarily in the background, pulling the strings. Having them in centre stage for this story should have been most satisfying. Instead, by focusing on them as the main villains, as opposed to the puppet masters, the reader is forced to admit that the Hellfire Club is nothing but a bunch of insanely rich twelve year olds who are fooling around and trying to piss off Wolverine. They’re not threatening, they’re annoying. Learning of their master plan made them look pretty lame and it kind of gives the rest of the series a new perspective. I’ve really hoping that the final volumes gives us more storytelling bang per page as I would love for the series to end with the same kind of energy and storytelling wonderment of the first dozen of issues.