Star Trek: TNG: A Rock and a Hard Place review 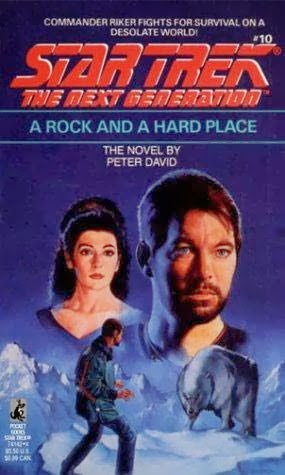 This is the second Star Trek book Peter David’s ever written and it’s the second one I’ve ever read. It was good but not as good as the first outing. I have to say I’m glad this wasn’t the first Peter David Star Trek novel I’ve read because I might not have read another one so soon. There is a lot to like about this book and one of them was to see how Pater David is getting comfortable writing about the crew of the Enterprise D. He writes good dialogue and his characters are true to their portrayals on the TV series but there’s a bit extra. The extra is that we get to be inside of their heads and most, not all, of it rings true. It’s very interesting to get more depth of characterization in the novels than in many of the television episodes.

The story of A Rock and a Hard Place is pretty simple. Starfleet Command has ordered that Riker be sent to planet Paradise, a terraforming planet. In his absence, he will be replaced by Commander Quintin Stone who is being placed on Picard’s ship because he’s proved to be an extremely difficult officer to discipline. Stone’s stay on the Enterprise results in high emotions and much conflict while down on Paradise, Riker is also experiencing some troubles where he has to survive in a harsh environment as well as defend himself against genetically engineered monsters.

The best thing about this book is David’s writing on the characters and, strangely enough, that’s also where David fails. I was sad that Worf wasn’t at the centre of this story like he was in Strike Zone but he does have some nice moments. David writes him so well. One of my favourite moments of his happens about halfway through the book. Worf and Deanna have a pretty big disagreement and their discussion which begins as a confrontation ends in renewed and strengthened friendship. It’s a joy to read and it shows just how good a grasps David has on these characters. This story took place sometime during the second season of TNG and this scene between Worf and Deanna shows some nice foreshadowing for their relationship, even if it’s unlikely those actual plans were laid out. The scenes works just as well without the knowledge of what’s to come for the characters later in the show.

Unfortunately, not all the characters are nearly as interesting as Worf or written as well. Commander Stone is a frustrating character. He’s such an ass! He has so much potential as a Starfleet officer but his disdain for all around him and his disregard for authority and regulations make him impossible to work with. I disliked him so much that I just wanted to scream during some parts of the book. I completely object to his behaviour and the intentional mistreatment of the crew. The book doesn’t work because of Stone. Not only was he frustrating as a character, but the way the crew of the Enterprise dealt with him was equally frustrating. The guy has serious issues and the author’s explanation as to why Stone is like he is rings as hollow as his ending to Strike Zone. If Stone is psychologically scarred by the events that took place on Ianni, how has it not been noticed during his psychiatric evaluations? What about the rest of the crew that was also present at the same event? Why are they fine? It’s hard for me to believe that there was no psychological precedent that resulted in Stone being more susceptible to the horrors he faced compared to the rest of Starfleet.

Stone also serves another purpose. Part of this book contains David’s criticism of the Prime Directive. Sometimes you simply can’t justify non-interference and David clearly wanted to voice that in this novel. The problem is that he uses a mentally unstable character to voice that message. It’s also difficult to accept a message when it comes from the mouth of an infuriating and dangerous asshole of a man like Commander Stone. He’s not even a real person and I’m angry at him!

What’s great about having multiple people work on one series is that different writers will better explain certain elements of the series. In this particular Star Trek novel Peter David explains a staple of life on the Enterprise in a way I’ve never understood it before: the communicators. I’ve seen the communicators be used in every single The Next Generation episode but David gives it a different perspective in A Rock and a Hard Place that made it revelatory. The communicator badges are on the uniforms of every member of Starfleet. They’re the ultimate communication device on board. They allow any member of the crew to talk to any other instantly. Yes, it’s basically just a little walkie-talkie by what does its presence on everybody’s uniform signify? Starfleet isn’t a democracy but if the Captain of a vessel wanted to hear the opinions of any of his crew, the communicators can create a forum for discussion and sharing of ideas. More important, it allows for easy communication on an extremely large ship and it has been particularly useful in difficult and dangerous situations. It’s something we’ve seen countless times on the show but I’ve never seen it described in that way.

There are a lot of things that do not work with this book but a few things do. Just like in Strike Zone, Peter David has a good grasp of the characters. Perhaps surprisingly is how good of a grasp his has on the female characters. Deanna Troi, though frustrating with her interactions with Stone, is well written. The same goes for Doctor Crusher. The best female character in the book has to be Stephie. She is the daughter of two childhood friends of Commander Riker. There are some surprisingly good dialogue and insight into the mind of a teenaged girl. I know that Peter David has daughters of his own and maybe it’s because of them that he writes Stephie so well. I’m not sure how old David’s daughters were at the time he wrote this book, but Stephie’s character is spot on. A Rock and a Hard Place isn’t my favourite Star Trek novel but there’s enough here to please, and infuriate, any fan of the franchise.