I’m a very big fan of Master and Commander: The Far Side of the World, the film adaptation of a few novels in the Aubrey-Maturin series written by Patrick O’Brian. I’ve watched that movie about once a year since it’s come out. Although I knew it was based on a 20 book (and one incomplete book) series, it never dawned on me to give the novels a try. Until the last time I watched the movie, that is. I’d glad I gave it a try because I ended up really liking the book but it was difficult read.

I felt the same way reading Master and Commander as I did while reading Herman Melville’s Moby Dick. The book is a combination of riveting passages and glacially slow accounts of marine life in the early 19th Century. When the book is good it’s really good but when the pace slows down and O’Brian writes about the rigging of the ship or Melville talks about the about the failed representation of the leviathan, it becomes a dry read. It’s not just those two books though; I seem to have a problem with any nautical adventure book. I had the same problem while reading Edgar Allan Poe’s The Narrative of Arthur Gordon Pym of Nantucket earlier this year. There is something about that type of narrative, I don’t want to say genre, that can lead itself to fascinating stories but the author’s all seem to get side tracked by the trivial matters. O’Brian, at least, has an excuse because he’s writing a historical fiction novel first and a bromance adventure novel second.

The pace of Master and Commander is slow. It’s damn slow. It doesn’t help that there isn’t a strong narrative flow. The structure of the book is episodic. Stories don’t necessarily follow each other; one doesn’t always flow into the next. The narrative seems to have been built around the smaller episodes that O’Brian wanted to write. I think the book could have been a hundred pages shorter without seriously impacting the story. The whole thing feels like an introduction to a larger story which make sense because it’s followed by several other novels (though at the time O’Brian wasn’t planning a series). 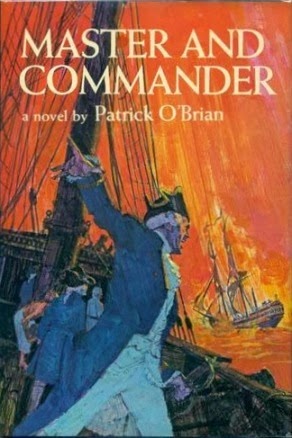 I’m very impressed by O’Brian’s descriptions of nautical life of the British Marines but I don’t care for the minute details of the ship’s design, rigging, etc. It’s impressive but it doesn’t appeal to me to directly, at least not a book made up of just that. I also don’t want to know everything about the ships, especially not right away. The first 100 pages feel like I’m reading a dusty historical account of life as an officer in the Royal Navy. Which is fine but it’s not balanced with story. It doesn’t feel like fiction until you’re passed that initial hurdle. I think, on the whole, O’Brian’s decision to start off the book in this way pays off. Despite being a dry read and a slow start, I learned a lot and I think it contributed to my excitement reading the rest of the book.

O’Brian is clearly a very intelligent man. He has a large vocabulary and doesn’t pander to the reader. That’s part of the problem, of course, because it makes for a difficult read. At time it feels like the book is written specifically for an audience made up of historians, nautical experts and enthusiasts. The average reader looking for a book about an adventure at sea might be in for a difficult read.

The use of historically accurate descriptions of the HM Sloop Sophie pays off for O’Brian as a storyteller and for the reader. It prepares the reader for the rest of the book. O’Brian is not only telling a story, he’s educating the reader. He starts even before the book truly begins. In his introduction, O’Brian clarifies two things to the reader. The first, he shares his opinion that it’s impossible to describe with complete accuracy the feeling of being in the Royal Nave in the early 1800s. Because of this he’s chosen to write his novel in as flat and unemotional a writing style as possible. The second point is that he’s borrowed a great many details from history books which should come as no surprise. It’s the first point is the most important one, in my opinion. O’Brian’s prose throughout the novel is flat, so very flat. During several passages he falls quite close to a writing style that could be considered academia. Despite O’Brian’s attempt to be as underwhelming as possible, the excitement during the action scenes is palpable. It’s surprising that writing in such a style that O’Brian successfully makes jokes. Unlike how the writing serves itself rather well to philosophical discussions and political debates among the characters, the flat writing shouldn’t work well at making jokes but it does.

The flat writing style is also contrasted with the characters. The characters are one of the better elements of the book, particularly Jack Aubrey and Stephen Maturin’s relationship. The characters, by their actions, take on mythical qualities which contrast with the flat, unemotional writing style. That a man such as Aubrey can fear that one of his officers considers him shy when he decided to no longer pursue a French man-of-war is pretty close to mind blowing. Especially considering that this scene occurs after we’ve read of several impressive accomplishments of Aubrey and his crew on the Sophie. Often time Aubrey is portrayed as more than mortal. He feels so strongly, his every moment is filled with passion. His desires seem excessive when compared to the desires of others but it’s only because he makes a conscious decision to live fully and completely. He’s a man of action with a large appetite. His appetites for food, spirits and women are very large. He feels very strongly too. He’s very emotional. When Maturin leaves the ship for a short period of time, Aubrey misses him so dearly he visualizes the conversations they will have together upon Maturin’s return. It might be because of the contrast between the events of the book and the writing style that it works, that it doesn’t feel forced or exaggerated.

There are plenty of things to like about this first novel and they’ve helped to convince to keep reading the series. Some of the smaller little things that contributed to my enjoyment included O’Brian’s dialogue which is excellent. It’s accurate to the time period (or at least it reads as if it’s accurate, I’m not expert). I also enjoyed discovering how Captain Aubrey and Stephen Maturin first met. Because I’m already familiar with some of the characters, it was a nice treat finding out where some of the officers and members of the crew first came into Aubrey’s service (characters like Pullings and Killick). I’ve always wondered where Aubrey got the scar on his face and ear in the movie. I know now because the story about how he got injured takes place in Master and Commander.

I found the first novel of the Aubrey-Maturin series to be challenging and I can only assume that the rest of the series will be similarly challenging. Perhaps less so because I’m far more familiar with the nautical language now that I was when I first began. Despite the challenges, Master and Commander was a rewarding read. I feel like a “better” reader. I feel the way I do when I read classic literature. There is a sense of accomplishment for having read and enjoyed the book. I’m also slightly disappointed because I’m so familiar with the movie and there is a completely different tone between the film and the novel. I’m still very glad that I’ve read the book because I’ve really enjoyed it even though it got tedious from time to time, I liked learning about the Sophie. Part of me wishes I had researched late 18th and early 19th Century Royal Navy before starting the book. Now that I’m done the first novel I feel ready for more but I’ll enjoy my shore leave for all it’s worth before heading out to sea once more.