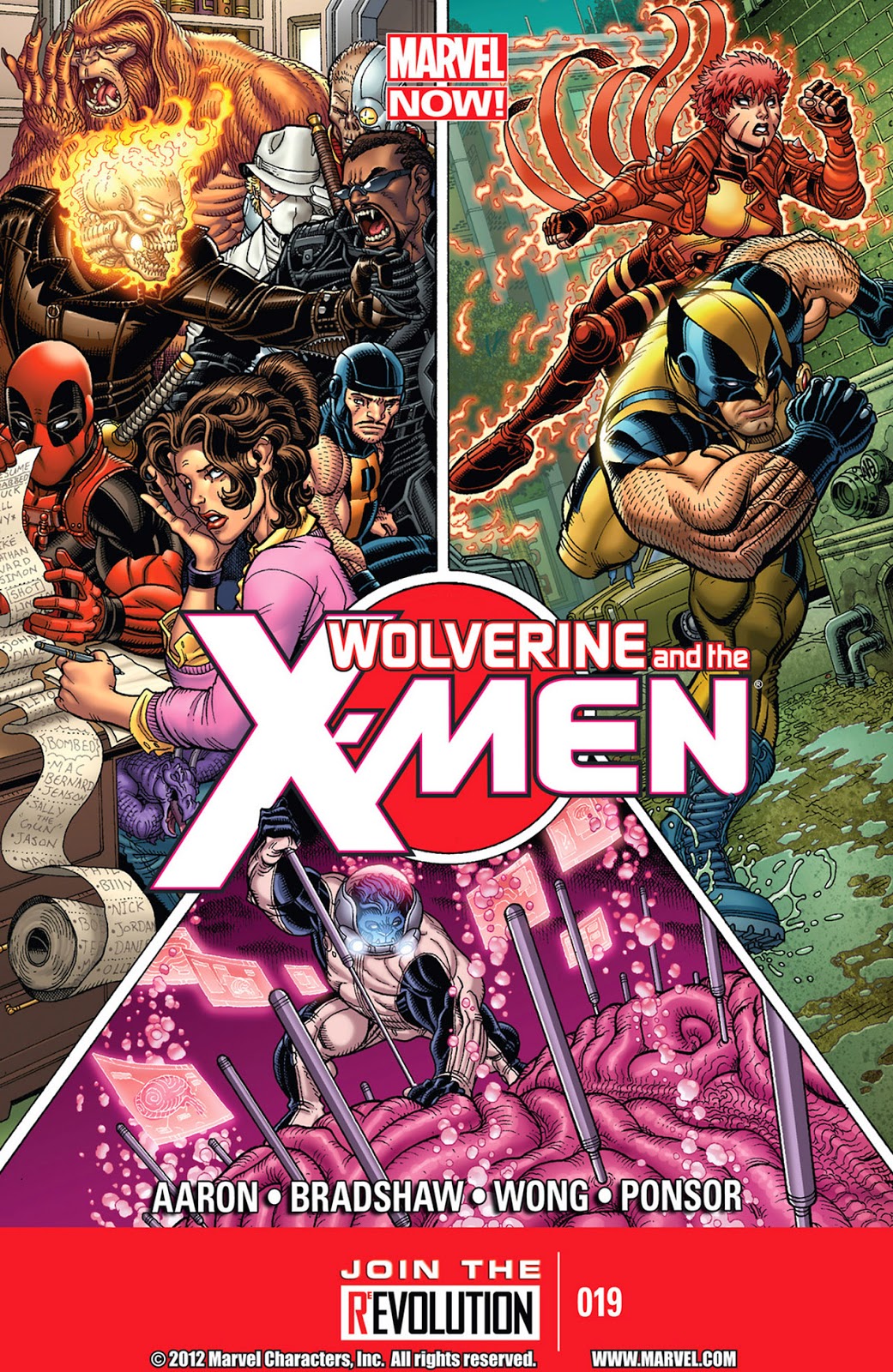 The fifth volume of Wolverine and the X-men is a transitional volume. It’s not breaking new ground but it’s not retreading any of the previous stories. Since the very first issue Jason Aaron has shown an interest in doing things differently as far as X-men comics of the last ten years go. Because of that, the series has had some tonal shifts. The first two volumes set the tone. The tone of the third and fourth volumes was different due to the influence of a story outside of the title. Volume five seems to be establishing a new, revised, tone of the series.

Now that Jason Aaron and his rotating group of artists are done telling their obligatory Avengers vs. X-men crossover tie-on issues and the focus is back on the Jean Grey School. A new (but also old) teacher comes to the school and a few new students are introduced. Aaron is setting up his pieces on the board and is preparing for his next big storyline. It’s a big of a shame that all the momentum he and artists Chris Bachalo and Nick Bradshaw in the first ten or so issues has nearly all been wiped out by Avengers vs. X-men which was a pretty lame crossover. Aaron now has the opportunity to steer the book in ad different direction but that also means he has to rebuild some of the momentum he lost. That’s why this volume feels like he’s introducing characters and plot lines to be explored further in the issues yet to come.

It’s somewhat unfortunate that Aaron is focusing so much on what’s still to come. He’s not really paying attention to what came before. The new Hellfire Club is barely present and for the few scenes they do show up they’re also in a transitional phase. They’re planning and scheming how they’ll bring destruction and ruin to the Jean Grey School. The bulk of this volume is comprised of a three part story that, sadly, feels like a bad B-movie. The purpose of the story isn’t to be a good story on its own, instead it’s to place the characters in the right emotional setting for a story that is still on the way. I didn’t expect to find such a bland story on this title. I’m pretty disappointed that the quality in the stories didn’t improve after the distractions that were the Avengers vs. X-men stories. The first and last stories collected in the volume were a cut above the three part circus story but I’m hoping this will be the only disappointing volume in the series.

The sixth volume is a distinct improvement on the fifth. It’s just a tad less enjoyable than the first two volumes. The issues in this volume are part of the new beginning for the title that the fifth volume was preparing for. The catch is that we’re not quite. This is a new beginning, that’s certain and Aaron’s writing seems more confident than it was in the last few issues. The new characters introduced in the previous stories get a chance to shine. Aaron’s taking the time to get to know the new characters and how they interact and what makes them tick. Even though the series has been filled with new characters, Aaron hasn’t taken the chance to focus on them completely and it’s nice to see him do that with this volume.


The story consists of Wolverine taking some of his more troublesome students as well as three new students to the Savage Land to teach them about survival. Of course, once they get there the whole things turns into a mess and despite Wolverine’s feelings of ineptitude, the students actually learn something. In the midst of all the chaotic superhero action, Aaron finds the time to continue planting seeds for his next big story. I thought for sure volume 6 was going to be the story he’s preparing for but it turns out it’s not. It’s still set up but man, it’s much more enjoyable set up than that weird circus story.

The last issue collected in this volume is pure teaser but it makes for an excellent single issue story. That’s what makes it work, actually. It’s a teaser in narrative form with some time travel mixed it. Very good stuff and it also contributes to the advancement of one of Aaron’s goals a writer for Marvel: giving every male character in the Marvel universe a beard. Wolverine and several Bamfs get a beard in this last story and Wolverine’s beard is full and white like he’s getting ready to move to the North Pole. I loved it. 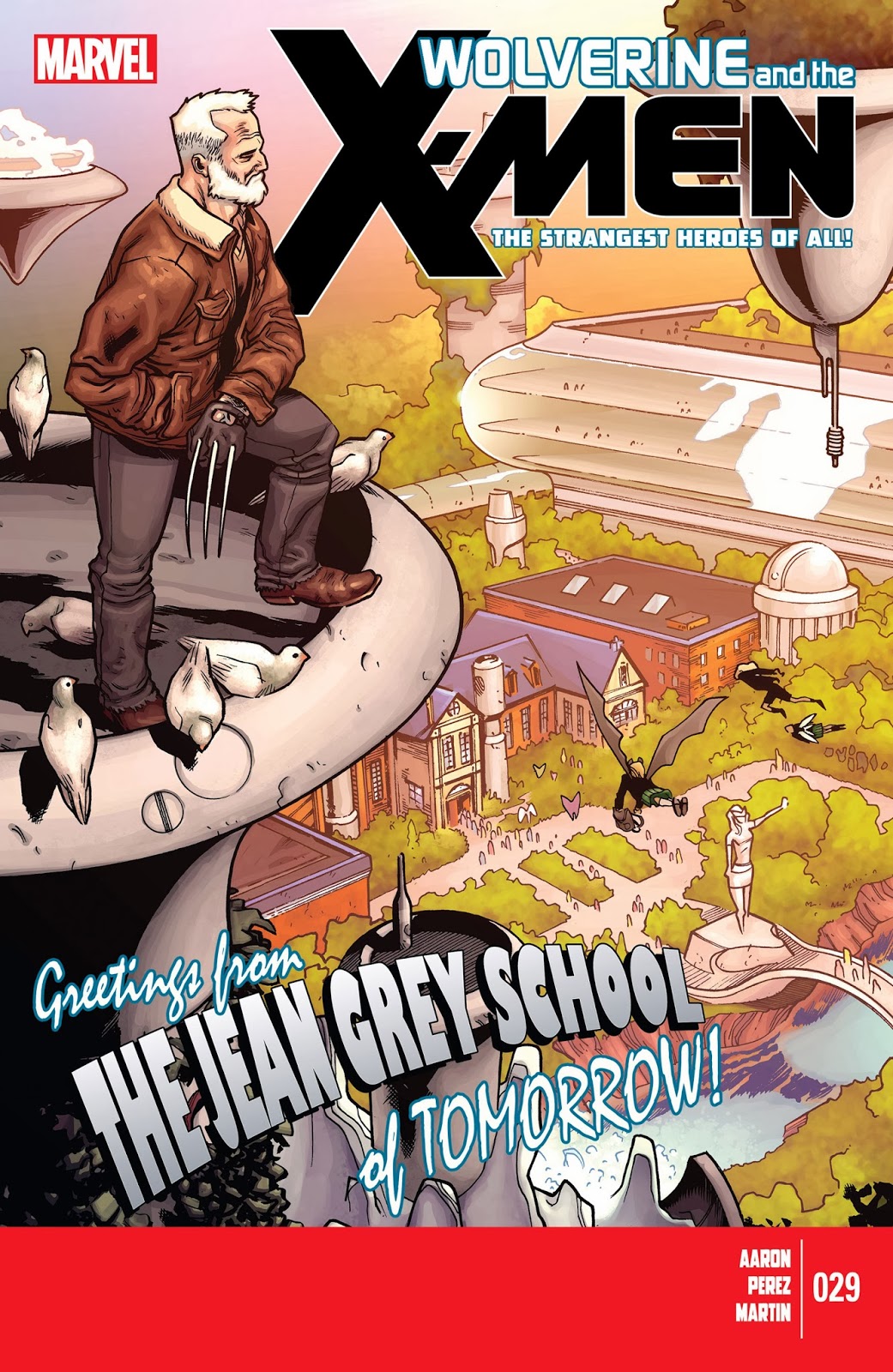 Ramon Pérez did all of the pencil art for the sixth volume. His style is more cartoonish than previous artists who have worked on Wolverine and the X-men, even more so than Nick Bradshaw. Bradshaw’s art is cartoony but it has a slight stiffness to it. Pérez art is very fluid and expressive. I’d rather have read a comic with more art by Chris Bachalo or Nick Bradshaw but Pérez does a good job filling in. His style was well suited to the energetic action sequences of the Savage Land.

The best thing about volume 6 is that it got me excited about the next volume. Aaron is planning a big story, with issue #29 he’s telling the reader flat out that he’s planning a big story, but he’s not quite ready yet. In the meantime though, enjoy these good X-men stories. I’m sure he’s sorry about the circus story but it did serve its purpose (it help Aaron and Bradshaw pay the bills) and it really could have been worse. Thankfully, Aaron replaced clowns with dinosaurs for the follow up story. Hopefully the next storyline bring the focus back to the Jean Grey School because that’s where all the real crazy stuff happens. I’m looking forward to it.